This applies to the BSD version of SCP, so that means MacOS.

When using SCP to transfer files between two remote hosts which both have non-standard ports, the -p and -P flags will not help you. For this, you need to use the scp protocol format. In addition, you have to pass the -3 arg, which transfers the files indirectly through your local machine, rather than directly between the source and destination machines.

This script is mostly for myself in the future. While playing around with Kubernetes and Rancher, machines become polluted with directories in /var, /etc, and /opt. Pollution is bad. This script will remove those as well as wiping down a system.

Warning: this contains a system prune, and removes everything.

Yesterday morning I read about Amazon's pricing mistake, where folks were ordering thousands of dollars worth of photography equipment for about 90 dollars per item. I checked the UK's Amazon site but the prime day was over, but something caught my eye. Scrolling down, there was a man wearing a futuristic looking band around his brow, emitting blue lights. This was Amazon Launchpad. But, as I searched for the item within Amazon Launchpad, I couldn't find it.

I decided to enlist the help of Yugesh, the most excitable Amazon representative I've ever spoken with. He decided to do some research with me, and discovered the device was a pair of Light Therapy Glasses. Not very exciting, I thought, and especially not for £260+.

As I looked into it, I discovered that blue light, especially around 460nm, stimulates intrinsically photosensitive retinal ganglion cells (ipRGCs) within our eyes, which suppress melatonin production, leading to enhanced wakefulness and reduced tiredness. It makes sense really. They say not to use your phone an hour before bed. To use the feature that reduces blue light, what I think of as the Lux effect.

But what if we want to feel awake?

So I decided to design and build some melatonin busting glasses, for a fraction of the price. I purchased some Lithium coin batteries, some disposable glasses, and dug out my electronics chest to do some inventing. One of the first things I had to do was construct some blue LEDs that wouldn't blind me. I needed diffused light but all I had was some ultrabright LEDs. So, I took some plastic from bags of zener diodes I had bought from CPC years and years ago, stretched it over the LEDs, and then secured it with some heatshrink tubing. 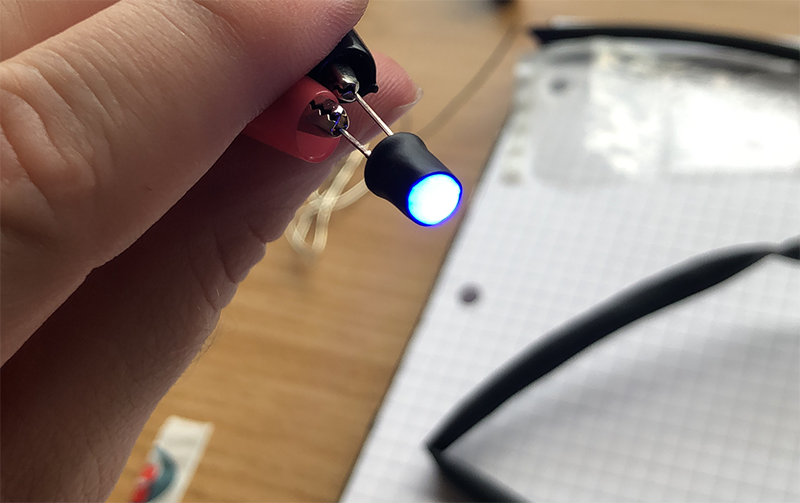 Great, then, I had to construct the power cells. I used two sets of 2 x 3.2v Lithium coin batteries, which I sealed with hot glue and electrical tape. I wasn't too keen on heating the batteries in order to solder the leads onto them directly, what with being in an apartment and not a lab. I did try, but it was a half-attempt, I already knew the solder wouldn't stick.

After this, I mounted some LED mounts onto the glasses, a small switch, the power cells at each side, so the weight is distributed, and then went ahead and wired it up. The result? Melatonin Busting Glasses. A little bit rough around the edges but I always think of it like the poetic-license equivalent of engineering. Prototypic-license. 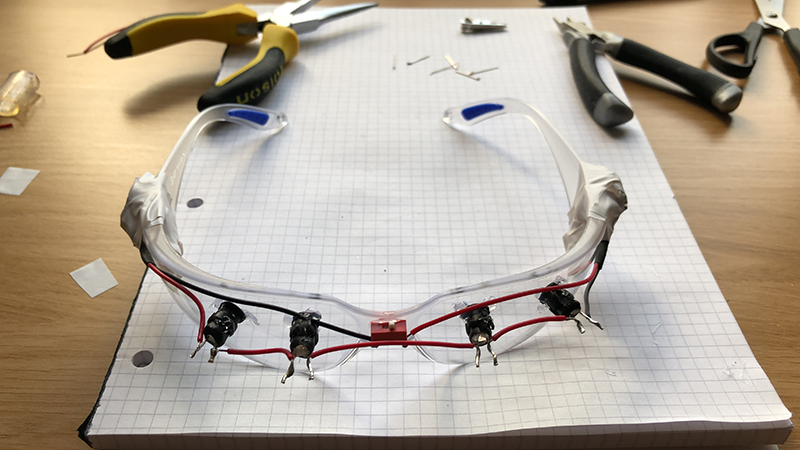 Four gloriously diffused but bright blue LEDs shining into the periphery of your eyesight. 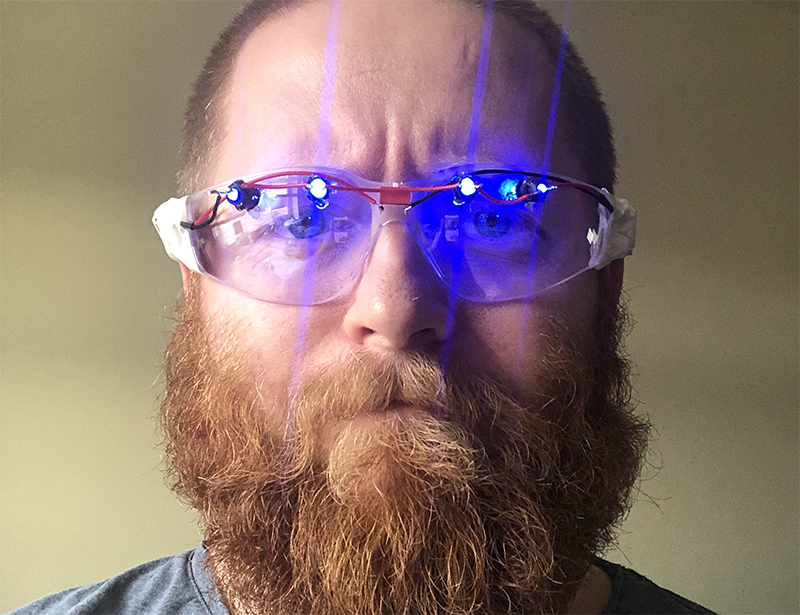 Disclaimer: I have about as much proof that these work as the producers of these types of glasses on Amazon have. I've now given these prototypes to a test subject who will try them out for a while and report back any noted effects. Please be careful shining lights into your eyes.

Here is something that's cool.

Scenario: you have a volume, you have a container using that volume, and you have some software that needs to access that volume data locally, outside of docker.

Nor can you mount two things to the same place.

The solution is to use intermediate symlinked container.

I call this solution the map volume.

In this dockerfile you can see that we create a directory (later to be used as a mount point), and then we create a symlink directory pointing to the same place.

Now you have mounted a docker volume to your local filesystem.

Update: I realised today that the original dockerfile wouldn't stay alive. I therefore changed the CMD to CMD tail -f /dev/null to keep the container alive. Thanks to bigdatums.net for that snippet.

Earlier tonight I wrote about DADI Web & SCSS using DADI Web middleware. Well, it gets even better. The following JavaScript preprocessor (based on node-enchilada) will serve up your JavaScript files all wrapped up using Browserify. That means you can use CommonJS and keep your client-side JavaScript tidy.

Again, all you need to do is drop this file into your workspace/middleware directory and make sure the paths are correct.

Protip: enchilada looks inside the src directory for a subsequent js directory.